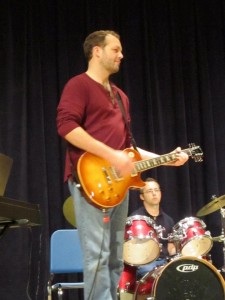 Derrick began playing the guitar at age eleven and studied with Bob Ferguson, a classical guitar teacher in Fort Wayne who was nice enough to teach him every Van Halen song he asked for.  During his second year Wright State University in Dayton, Ohio, he began teaching at a music store in Springfield (Guitar Attention Center), and quickly built up a roster of 25 students a week.  After graduating with a Bachelor’s in Mass Communications, he continued pursuing a music career playing in bands and teaching at other music stores in the area.  Derrick moved to Boston in 1997 and began teaching Music Maker Studios, and has made a living as a music teacher and professional musician ever since.

On the weekends, Derrick plays in a cover band called Element 78 which plays 3-4 nights a week all over New England at night clubs, parties, and weddings.  Element 78 plays rock, modern country, and alternative music as a four piece band and as an acoustic duo.  You can find out more information about his band at www.element78band.com if you’re interested in seeing where they perform.  In the past, Derrick also worked as a sub guitarist for original and cover bands in Boston including Dick and Jane, P.D. Rogers, the Jes Perry Band, and many others.

Derrick’s students study many different styles of music on electric and acoustic guitar.  Most of Derrick’s students focus on rock and blues lead guitar or folk and blues fingerstyle, and he has a large library of transcriptions from magazines and songbooks, as well as copies of transcriptions he’s done for other students.  Derrick also likes to introduce students who are interested to simple classical pieces and jazz standards so they have some exposure to other styles of music.

Below is a video of Derrick teaching one of his students the intro to Sweet Child O’ Mine.