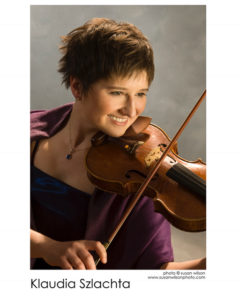 Upon graduation, Ms. Szlachta was invited by the Institute and Festival of Contemporary Performance in New York to perform Luciano Berio’s Sequenza and Elliott Carter’s Triple Duo. Recently, she returned to New York to give the World Premiere of “Six Miniatures”, composed for her by Thomas Weaver. Ms. Szlachta also recently recorded music for a film entered in the Irish Film Institute’s Movie Festival, and appeared in the prestigious Convergence Ensemble Chamber concert series. She has also had the privilege to collaborate on stage with Menahem Pressler and Joseph Silverstein, and appeared in a variety of venues such as Carnegie Hall, the Kennedy Center and Boston’s own Jordan Hall and Symphony Hall.

Locally, she performs on regular basis with the Cantata Singers and the Boston Modern Orchestra Project. Currently, Ms. Szlachta is on the faculty of the School of Music at Boston University, the Preparatory School at New England Conservatory, the Intensive Care Project and BUTI’s summer program at Tanglewood. She is also a member of the Amabile Piano Trio.